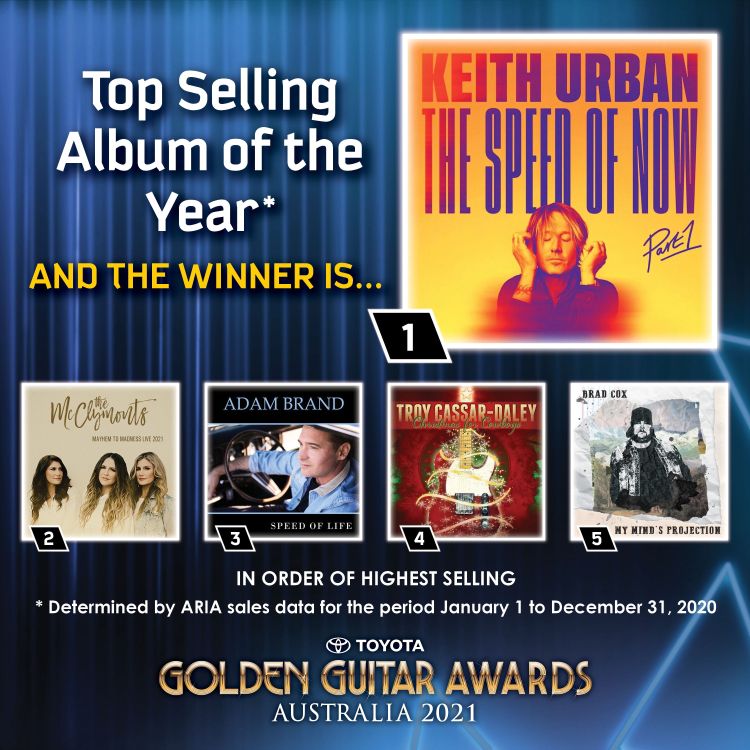 Tamworth Regional Council and the Country Music Association of Australia Inc. are delighted to announce Keith Urban as the recipient of the 2021 Golden Guitar Award for Top Selling Australian Album of the Year for his latest album, THE SPEED OF NOW Part 1.

The winner of the Top Selling Australian Album of the Year award is determined from data compiled by ARIA(Australian Recording Industry Association) from January 1 to December 31, 2020, for  albums of new material, first released in 2020. THE SPEED OF NOW Part 1 is Urban's 10th studio album and a follow-up to his 2018 No.1 album Graffiti U. Since its release THE SPEED OF NOW Part 1, which includes the worldwide smash ‘One Too Many,’ featuring P!nk, has cracked sales and radio charts in Australia, the U.K., Japan, Germany, the Netherlands, China, Russia, Belgium and South Africa. It simultaneously debuted at #1 on the charts in Australia, the United States and Canada and includes ‘Polaroid,’ ‘Superman’ and ‘Out the Cage,’ which features Breland and Nile Rodgers.

Chairman of the Country Music Association of Australia, Mr. Dan Biddle, said: "Congratulations to Keith and all of the artists and their teams in the Top Selling Album of the Year category. I am sure they would all join me in thanking the fans who support their favourite artists by buying the CDs & vinyl and streaming the music that kept us going throughout 2020".

The top 5 top-selling Australian country albums of the year were:

The ABC is the official broadcast partner of the 2021 Awards show, and fans can tune into ABC's coverage via the live stream at https://www.facebook.com/LandlineABC or the live radio broadcast https://www.abc.net.au/country/. A 90-minute edited highlights program will air on ABCTV +iview at 12.30 pm on Sunday 24th January. The show will also be live-streamed via www.tcmf.com.au/live and broadcast by KIX Country Radio.

For more information or to purchase tickets, head to www.tcmf.com.au/awards